All gardens start with a vision, but even a backyard pepper patch requires a certain level of planning and grit that thwarts most from ever becoming more than a morning coffee musing. How powerful does the vision have to be, then, to design and build a full-blown Japanese garden in east-central Illinois?

For James Bier (MS, ’57, geography), creator and designer of the gardens at U of I’s Japan House, it started with war. As a young man, Bier was drafted to serve in the Korean War and was stationed in Tokyo as part of the U.S. Army’s 29th Engineer Mapping Battalion. He fell in love with Japanese art and culture.

“I lived in Japan for a year compliments of the army,” he said. “As a result, I said, ‘I’ve got to have something that reminded me of Japan, and the houses, and the gardens that I saw.’”

That’s the kind of powerful draw that Japanese gardens, with their careful designs reflecting certain philosophies and principles, can have on people. Visitors drive for hours to see the Japan House and its gardens. How hard was it to build them? Let’s start with this story about finding the perfect rocks, as told by Bier.

Rocks are critical elements in Japanese gardens—they can be even more important than plants. Rocks with the right texture and color for a Japanese garden can also be rare as hen’s teeth, depending on where you are, and it turns out that most of the glacial till that blankets east-central Illinois like bowling balls is totally unbefitting a Japanese garden. Back in 2016, when then-retired Shozo Sato, founder of U of I’s original Japan House, discovered a perfect rock in California, he considered it so noteworthy that he hauled it across the country himself to donate to the Japan House gardens. It weighed 2,000 lbs.

Bier discovered east-central Illinois’ rock problem in the late 1990s, when he was assembling materials to create the Japan House gardens in their present location in the Arboretum. The right rocks weren’t readily available, and they were too expensive to ship in, so Bier got in his car and drove, and drove, and drove.

“Fortunately for me I had an undergraduate degree in geology,” he said, and he found a field near Mahomet that had become a dumping ground for rocks. Some of them were perfect, and they became the core of the Japan House gardens. 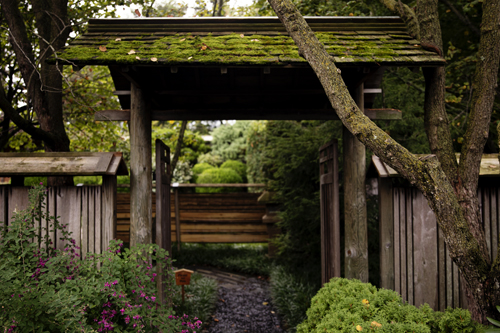 A gateway in the gardens outside the Japan House. The grounds include a tea garden and a dry garden, and James Bier would like to add a stroll garden. (Photo by Jesse Wallace.)

Indeed, creating the gardens around the Japan House has been a pursuit of perfection for Bier. At age 92, he still has unrealized visions for what the gardens can become, but many are of the opinion that he’s already created a work of art. In 2018, he received an Illinois Arts Legacy Award from the College of Fine & Applied Arts for his design and dedicated stewardship of the gardens and ponds near the Japan House.

The gardens benefit from an artistic flair that Bier has possessed for a long time. Born in 1927, the Cleveland native began college at Western Reserve University as a music major, but, as he told the Champaign-Urbana News-Gazette in a recent profile, he discovered cartography during his junior year and became enthralled with the art, drawing, and design required to draw maps.

Today, in an age of GPS and map apps, he proudly calls himself one of the last cartographers (he ended his mapping career just this year), having published nearly 3,000 hand-drawn maps and atlases. His “Reference Maps of the Islands of Hawaii” (University of Hawaii Press) has sold more than 2.6 million copies. Some of his original drawings are in the U of I’s Map Library, and others will soon be part of the University of Hawaii’s Map Library.

His love of maps and Japanese gardens developed side by side. After the Korean War, Bier earned a master’s degree in geography from U of I, and he became a staff cartographer and lecturer in the Department of Geography (now Department of Geography and Geographic Information Science). He traveled back and forth to Japan six times, studying a great many gardens, examining color slides, and reading literature.

He and his wife, Lorene, built a house on the south side of Champaign that was designed by the late John Replinger, a professor of architecture at U of I, as half-American and half-Japanese. Bier also designed their 0.6-acre lot into a Japanese garden which over the years has been visited by literally thousands of people, some arriving by busloads.

Bier retired from U of I in 1989, but his involvement with the Japan House grew about a decade later when the university tore down the original Japan House in Urbana. They launched plans to rebuild in the Arboretum, and Bier presented the director, Kimiko Gunji, a plan for a tea garden.

She loved the idea, but they didn’t have the money to build it. Undeterred, Bier donated his own time and money for the project. He continues to work, design, and fund development of the gardens to this day. 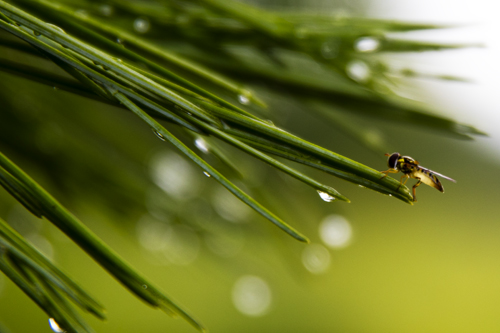 A bee pauses for a moment on a pine branch outside the Japan House. (Photo by Jesse Wallace.)

The grounds around the Japan House include ponds, a tea garden consisting of a water basin, stone paths, redbuds, maples, and other elements reflecting a path to enlightenment, and a dry garden, consisting of a careful assortment of raked gravel, rocks, and shrubs to reflect a mountainous landscape.

To maintain and develop the gardens, Bier relies upon a team of about 10 devoted volunteers who help him with the labor, including everything from clipping to moving rocks and tearing out plants that have outgrown their purpose. When you’re shaping nature into an artistic vision, details—colors, the spacing between stones, the width and height of plants, and so on—all matter.

Bier sat in the shade of a gazebo outside the Japan House one warm day earlier this fall, before the Halloween snow and sub-zero November windchills. There are many challenges to building an ideal Japanese garden in east-central Illinois, he explained. Rocks are just one. The dramatic changes in weather wreak havoc on plants, and university policies and procedures weren’t necessarily written to keep in accord with ancient Far Eastern philosophy.

It takes persistence, negotiation, funding, time, and planning. Bier has had a plan for 20 years to add a traditional-style stroll garden around the nearby ponds. Doing so, he speculated, would help make the Japan House and its gardens an even more well-known destination.

Realizing this next vision for the gardens is a matter of raising money, he said. The grit? He’s got that covered. Time? At his age, he holds no illusions, but he knows what’s possible.